A$AP Ferg and Adidas Skateboarding are teaming up on a new “Trap Lord” collaboration set to hit the market on September 1st. It’s not yet known exactly what the collection will consist of but a new shoe is almost certainly in the mix.

Adidas and Ferg released a teaser commercial for the new line earlier this week. Check out Ferg’s feet for what could be a sneak peek.

It’s not the first time the two have come together to collaborate on a project. A$AP and adidas first came together in 2015 with the first “Trap Lord” release which included a custom colorway shoe and a t-shirt sporting a tribute graphic to A$AP Yams who passed assay in January, 2015.

Since the first “Trap Lord” project dropped Ferg has gained much more notoriety thanks the success of his second album “Always Strive and Prosper”.

Though Ferg doesn’t skate he certainly appreciates the skate culture. Ride caught up with Ferg in 2015 to get his thoughts on skateboarding and the culture.

“It’s been cool to watch Harlem’s skate culture grow over the years. It’s definitely changing – you are getting more guys from downtown moving uptown. There is a direct connection with the freedom and rebellion that comes with skateboarding and our BMX clicks uptown. I performed at the adidas Skate Copa and the skaters went crazy for my music—it’s a ton of respect for the culture and I believe skaters love hip-hop.”

Ferg’s collaboration is just one of a few new projects Adidas Skateboarding has been working on recently. The company has also teamed up with Tyshawn Jones on a new custom Pro Model Vulc ADV’s.

Jones has been gaining notoriety this summer as he has been killing it in the Street League Series. Before being selected to join the Street League this summer Jones was known for his raw street style and for absolutely shutting down New York’s infamous Courthouse Ledge to Drop. Jones first official video part came in adidas’ 2016 film “Away Days”.

With this custom sneaker Jones put his twist on the classic adidas colorway. He used the newly vulcanize-for-skateboarding Pro Model as the base and added a snakeskin pattern. Then Jones put green details on the classic adidas stripes, an homage to Stan Smith. Jones put the finishing touches the shoe by utilizing the tongue to pay tribute to his dead bulldog Nico.

The custom shoe is set to drop a few days after Ferg’s on September 5th. 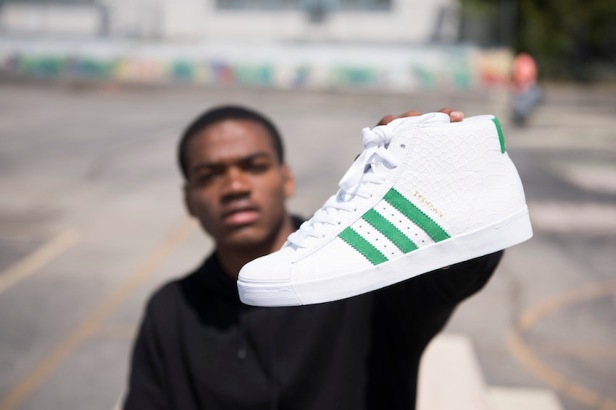 Below is a list of upcoming skateboarding and snowboarding events and contests. There’s no way I got them all so if you know anything else tweet at us @NextEraAction.